Identical to every Christmas Eve, Adam climbed into bed at precisely 10 p.m. and forced his eyes shut, determined to sleep before Santa arrived at his suburban home. All the familiar feelings flooded his mind–anticipation, glee, curiosity–but an anxiety lingered that he could not shake. Though he had clearly not done anything terribly wrong all year, the uncomfortable possibility that Santa might again skip his house tainted his thoughts. By some terrible twist of fate, the jolly old man had not delivered any presents in the seven years since Adam had moved to McGuire Street with his family. Adam spent hours contemplating this tragedy but still could not fathom any reason other than Santa’s own error. After all, their home had an ideal roof, plenty of sweets and even a roomy chimney. 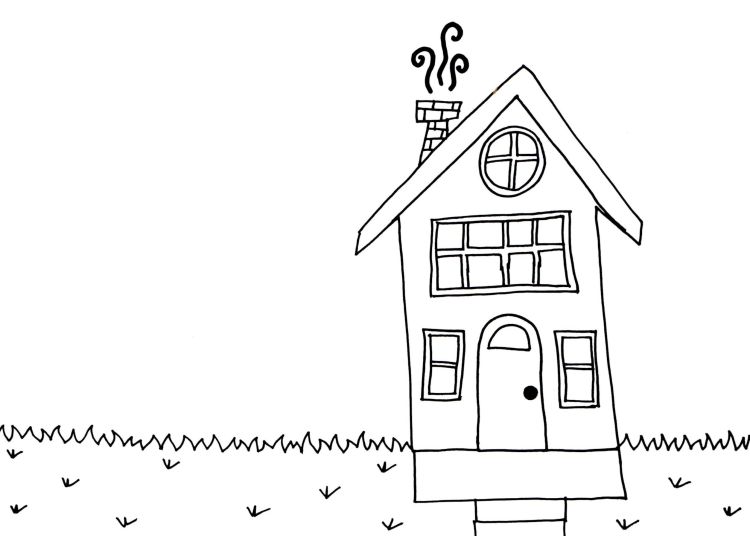 It simply had to be Santa’s fault and not his own; after 30 straight years of presents–even with questionable behavior–Santa could not possibly deem Adam unworthy. 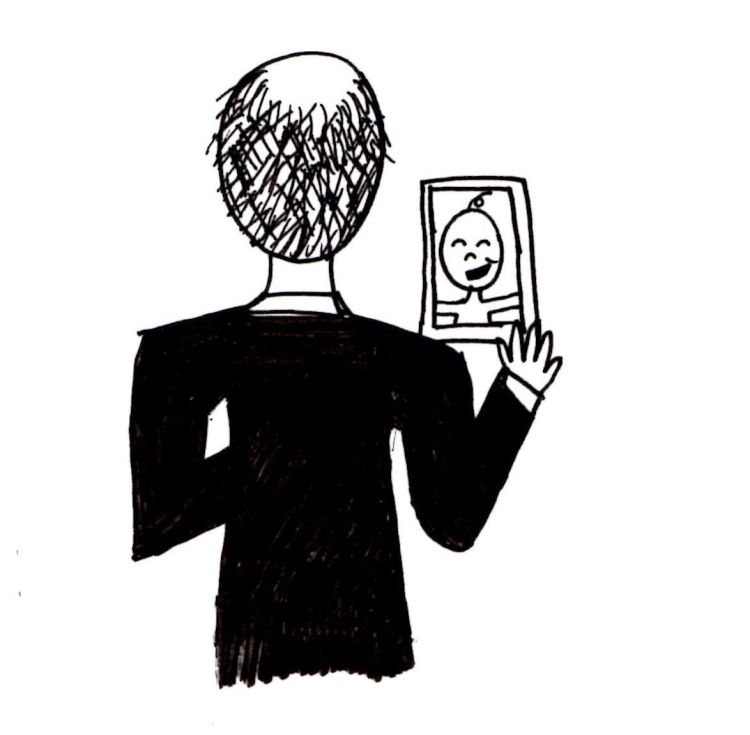 While Adam mourned his own lack of presents silently, he felt terrible for his daughter Elizabeth, who in her seven years of life had not once experienced Santa. Every year Adam assured Elizabeth that on Christmas Eve night Santa would fill the living room with presents and every year Elizabeth awoke to an emptiness only partially filled by Adam’s own gifts for his daughter. 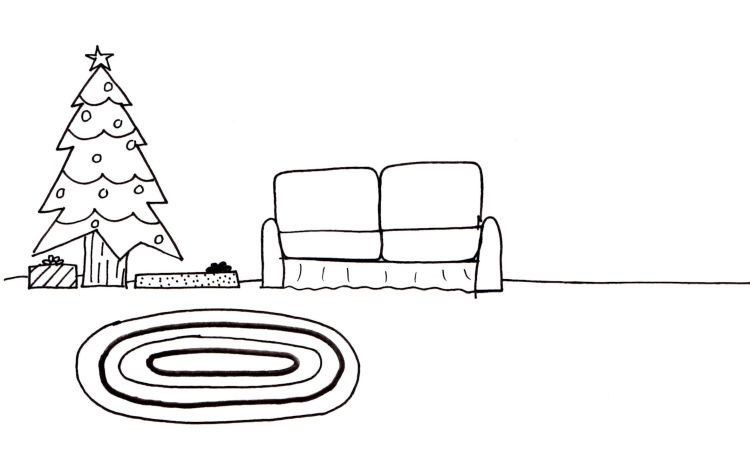 Of course it did not help that Adam’s wife had died in a car accident shortly following their move into the new house, which left Adam alone to care for his young child with only an accountant’s salary to help. Adam budgeted what he could to purchase gifts for his daughter but without Santa’s generosity his attempts were in vain; nothing could match the magical mornings with which he had grown up.

The week before, Elizabeth had revealed to her classmate Leah that she did not expect much that Christmas. 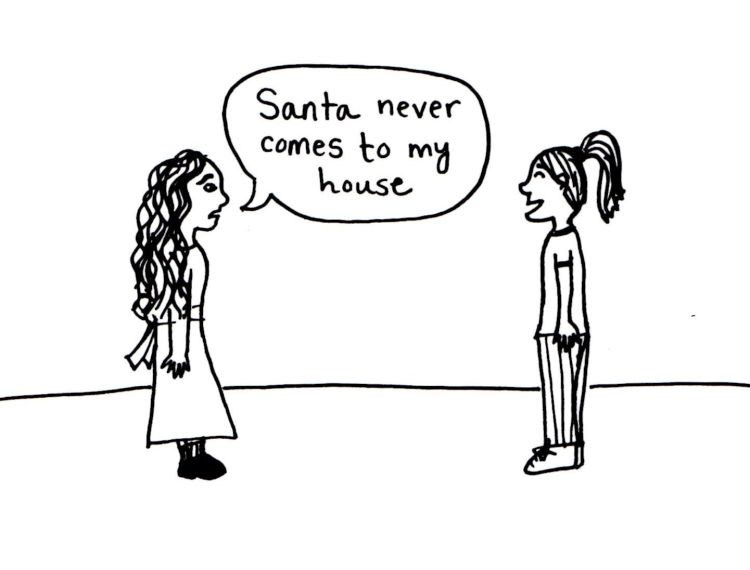 Leah immediately fell into a laughter broken only by Elizabeth’s pleas for an explanation.

“You actually believe that?” Leah said, “All that Santa mumbo-jumbo?”

Leah chuckled again and leaned closer to Elizabeth. “I know a secret,” she said, “Santa isn’t real.” This time Elizabeth laughed. Santa not real? The thought was absurd.

“I’m serious,” Leah said, “It’s all fake. I watched my parents put out presents last year but they were all supposed to be from ‘Santa.’ There’s no way he’s real.”

Elizabeth stared back in bewilderment for several seconds while she carefully dissected Leah’s proposition. According to her father, Santa had stopped delivering presents only when he had begun to spend Christmas away from his parents. Her mother had never been alive for a Christmas with her so following Leah’s theory it would be Adam’s sole responsibility to provide presents from “Santa.” Elizabeth’s jaw dropped.

“My dad believes in Santa,” she said, “But he’s wrong. Santa was never real.” Once she recovered from her initial shock, Elizabeth began to form a plan in her mind. She spent the next six days focusing solely on her Christmas plan. Every day after school she went to her room, dragged the craft box from her closet and worked diligently until bedtime. During the day her mind raced with new ideas and at night she slept soundly from exhaustion. She thought of nothing but Christmas morning until the day finally arrived. 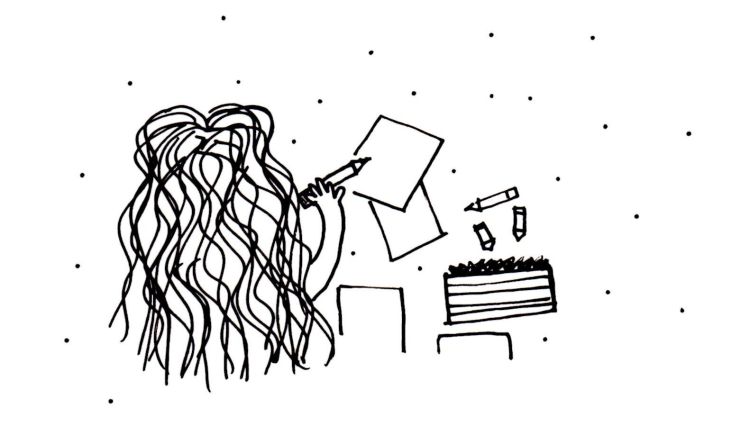 “Wake up Daddy,” she said, “It’s Christmas!” A familiar rush flowed through his body and his heart fluttered with excitement.

“I’ll meet you downstairs,” he said before pulling on his favorite reindeer pajamas and hurriedly brushing his teeth. The anxiety from the night before remained, but nothing could falter his Christmas spirit. Minutes later, he descended the stairs hoping to see anything but the scene he had arranged the previous night.

Adam turned the corner to a sea of color and glitter that filled his heart with a joy he had not known for seven years. Feebly wrapped presents spilled from beneath the tree while the two hanging stockings threatened to fall from their weight. Sparkles littered the floor and directed his eyes to the gifts’ labels which read “From: Santa” in suspiciously youthful handwriting. He glanced at his daughter, whose glitter-laden face bore a smile so pure he could not help but grin in return. 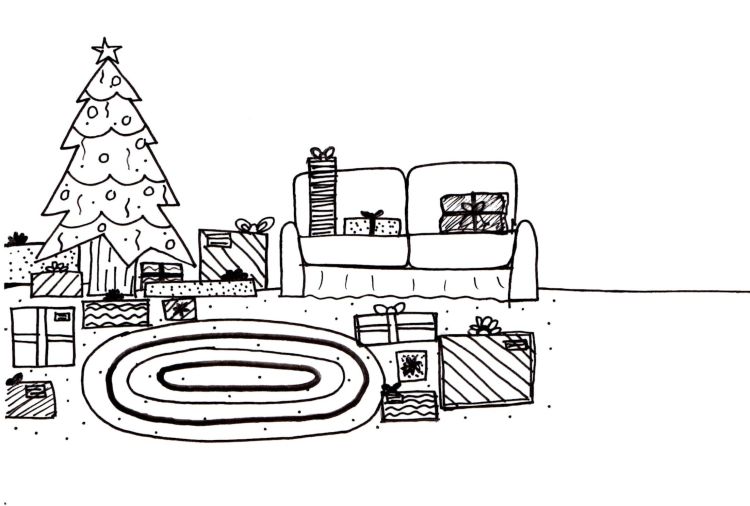 The two immediately got to work unwrapping presents. Elizabeth eagerly fed gifts to her father, who discovered that Santa had chosen a distinctively homemade route that year. The room soon filled with crumpled wrapping paper and construction paper masterpieces disturbed only by the occasional beaded creation. When they reached the last present, a doll for Elizabeth from Adam himself, Elizabeth beamed and reached under the table.

“Wait Daddy,” she said, “I have one more present for you.” She handed him a small piece of construction paper and his eyes filled with tears as he read the carefully crafted words.

“Thank you,” he said, “Thank you for a perfect Christmas.” 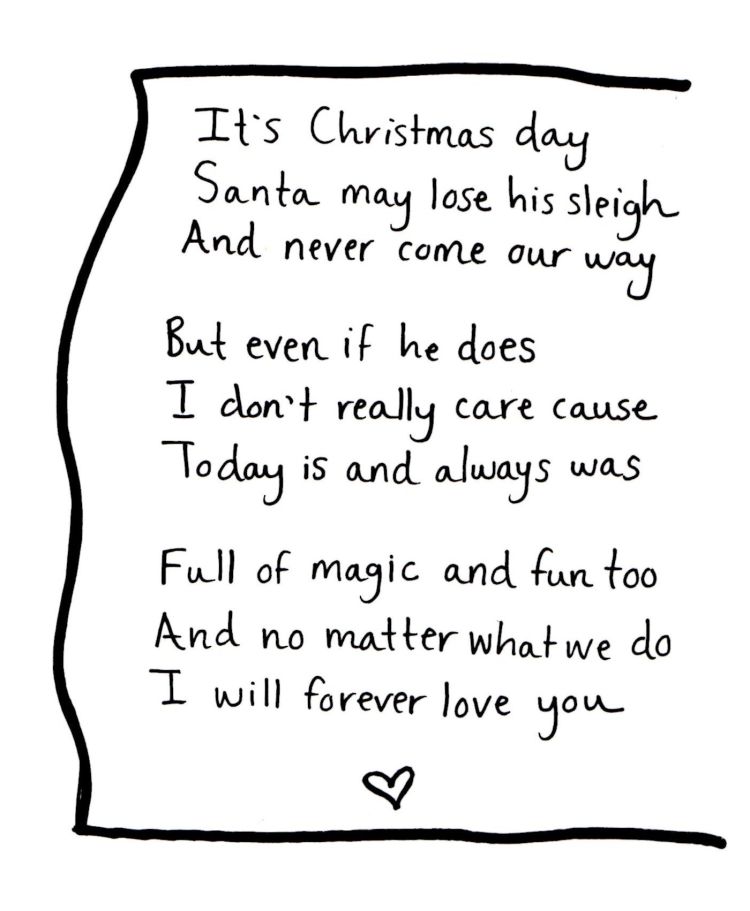